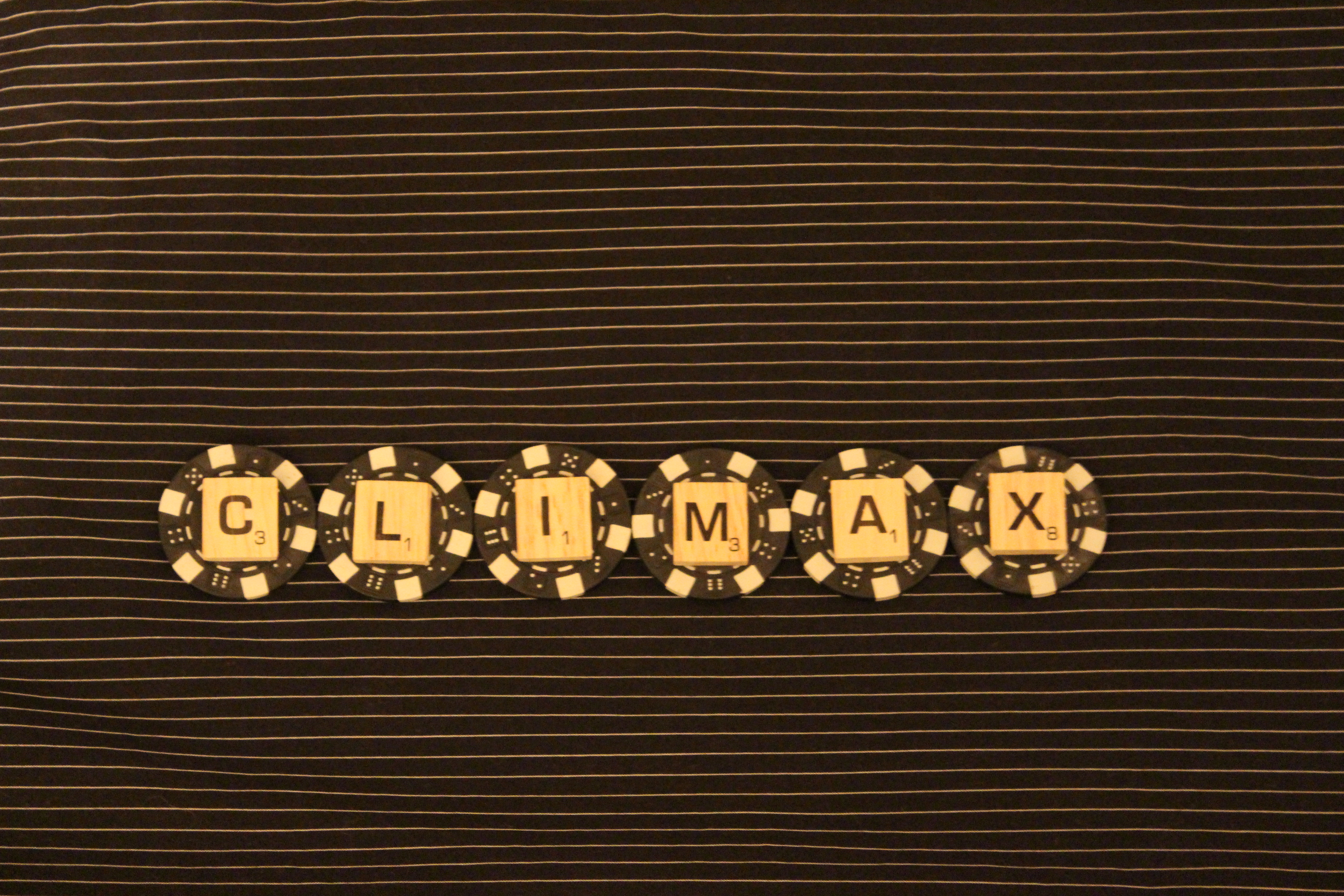 Jim Butcher sums it up nicely. “Everything you did in your book leads up to this. Deliver on the climax or die as a writer. Simple as that.” So essentially, no pressure.

Climaxes of a story are the natural conclusion, the culmination of all the work a writer has done up to this point. The story question gives the novel a compass bearing of which direction it’s heading. We’ve packed all the characters that are emotionally invested in answering it into our van like a circus clown car. We’ve kept adding layers of conflict between the protagonist and antagonist, their encounters being rocket fuel for our journey, and now we’re cratering forward at breakneck speeds. It’s all led up to this one moment. So how do we plot it?

First off, we take a thorough inventory of what pieces we have to work with. What characters have we developed over the last 70,000 words? When will their true intentions be revealed? What could we build from all the events our protagonist has survived? What skills does he/she now have that could come in use? The reason why the writer is so ruthless with which Acts, Subplots, and characters make it into the final cut is because we plan to use them all now. We don’t want any dead weight. We want the leanest, tightest story possible.

Then we take the Rule of Ten and we double down on it. We come up with a solid twenty possible climaxes, judging each by a very specific set of criteria: Isolation, Confrontation, Dark Moment, Choice, Dramatic Reversal.

Isolation refers to the concept that at the climax’s most crucial moment, the protagonist must be alone in his story. For sure, other characters may be all over the climax, helping build or alleviate tension, but our story, our conflict, has always been about the fight between the protagonist and his adversary.

Naturally from this isolation comes the ultimate confrontation with his/her antagonist. We’ve spent the entire story promising our audience one of them will reach their goal, and there is no greater way to leverage that anticipation than by watching them duke it out.

Next, comes the dark moment. Things do not go well for the protagonist. They can feel everything they’ve striven for about to be snatched from their grasp. This moment resonates deeply with the audience because we’ve built empathy for the character.

Surrounded by the shadows of doubt and impending failure, one slim hope remains, one choice. There’s a chance, a very slim one, that the protagonist can succeed, but it’s not an easy choice. In fact, it will be the most difficult, the most counter-intuitive choice the protagonist can make. It all comes down to this.

And then comes the dramatic reversal. The very choice the protagonist never would have wanted to make at the beginning of the story turns out to be exactly what was needed to succeed. He reaches or fails to reach his goal, but the story question is answered. We’ve delivered the goods.